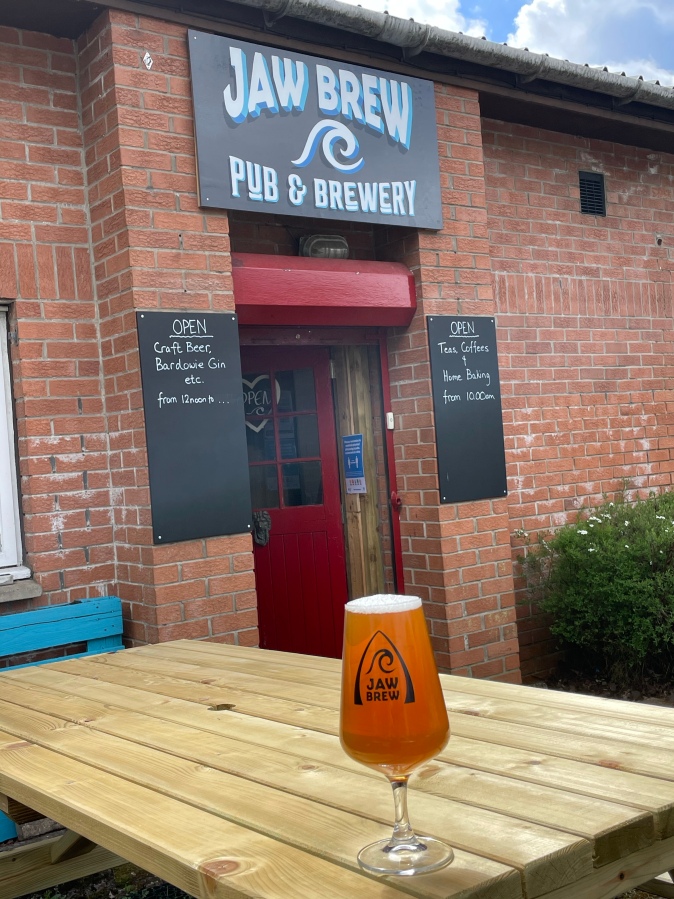 Pubs reopened in Scotland last week. If you count reopening as only being able to drink alcohol outside that is, though you can have soft and hot drinks inside if the pub is open indoors. There is also the matter of a supposed maximum two hour permitted stay. It’s a bonkers rule that encourages the very things it seeks to prevent, as groups mingle and drink informally between bookings.

And that’s before we factor in the weather. Brian and I sat stoically quaffing as an icy wind cut its way through our feeble defences, akin to Messi playing against Brechin City. Our first stop was Jaw Brewery, now located in Milngavie, better known for being the start of the 96 mile West Highland Way.

Jaw was set up by Mark Hazell in 2014, named after a geographical feature near his home. The logo uses the image of a whale’s jawbone.

The brewery moved from an industrial estate to the present site over the a year ago, but obviously hasn’t been open to the public much since then.

Mark told us he was brewing about a third as much as at pre-pandemic levels, and was focusing on the new taproom and the Bardowie gin side of the business. He had one on cask – Drop, styled as a 4.2% session IPA – and four on keg, including the welcome, warming 7.1% spiced winter beer Laga Maris.

There are three tables at the front, with more planned at the sheltered back. Only two other people, gamely sipping gin, were daft enough to share the artic air. Who needs ice when there’s hailstones?

We decided to heat ourselves up with a walk to the Burnbrae, a Good Beer Guide regular at various times, and a large food-oriented pub. Neither of us would normally give much gullet space to Old Speckled Hen or Greene King IPA, but in these strange times both were sampled and found to be in good condition.

There was time for a couple more beers, disembarking at Patrick as the Lismore was open and doing a brisk trade despite the chill. It’s a fine old bar with some pleasing glass work.

And toilets with long memories.

They normally put a Kelburn beer on here but today it was only Deuchars, served in good form. We were positioned on a table with three men of Clydebank, Brian making a fourth. Talk centred around the Bankies, brilliant former players (Davie Cooper, Gerry McCabe) and famous matches. Colin showed us what he’s made of.

While Des and Campbell kept us entertained, oblique and not so oblique references being made to the latter’s enthusiasm for women. Sure enough, he disappeared and returned twenty minutes later with a woman. Being 68 and totally blitzed was clearly no impediment to his methods.

It seemed like the right time to leave for the train home.

11 thoughts on “The Great Outdoors?”