Fleeing Lincolnshire with indecent haste, the last section of the day’s cycling took us into Norfolk through Walpole Cross Keys and Terrington St Clement (which autocorrect called Terrifying St Clement). Terrifying for the pilot of this plane perhaps.

The unoccupied Bullards pub nearby (below) has been an empty house since the Jolly Farmers closed in the 1960s. I only know this after discussing it with the barman at King’s Lynn’s Nip and Growler when a man called Steve walked in and said it was his uncle’s pub.

We arrived in King’s Lynn by boat. It’s the only way to travel. A ferry has operated here since at least 1285 when the annual rent for it was one clove. The ferry saved a twelve mile detour and the payment of extortionate tolls to the “rapacious Lord of Rising” and when it passed into public hands in 1969 the rent was two “well-fatted” swans.

It was great fun but didn’t seem to quite make it all the way to the other side so it was a case of walking the plank for those boarding from town.

King’s Lynn is gorgeous. It has an 11th century church, now a Minster.

And buildings from every century since including a C15th Guildhall.

It has a film set-like waterfront along the mighty, and sometimes flood-prone Great Ouse. What more do you want? The oldest theatre in Europe? It has that too.

We learned more about Lynn in the Nip and Growler, first from Steve then his son-in-law College Dave, about a post-war population movement of Londoners into new housing, much resented by the locals apparently. That was how Dave’s parents arrived there. If you look at the Wikipedia entry for London Overspill there are over forty towns listed as receiving around a million displaced Londoners. King’s Lynn is over one hundred miles away but the most distant listed, to my surprise, was Burnley, some 245 miles north.

The Nip and Growler is an all day opener in an old Jessop’s camera shop. All beers were local, on keykeg and available in four different quantities. We stayed for an hour as the company was good and tried several different beers.

Several were standouts. I rate Panther beers highly and their 4.2% Spring Pale was gorgeous. Lady Moe by Station 119, a brewery on an old American airbase was a good going 3.9% session beer; and the Wildcraft Wild Norfolk 4.2% dry hopped IPA was very much to my taste.

I asked about other worthwhile places to visit and was told to go to the Crown and Mitre “if the green light was on outside” which it was. A waterfront pub licensed since 1743 and crammed with maritime memorabilia, it is run by Roger who we had been told was “a character”. 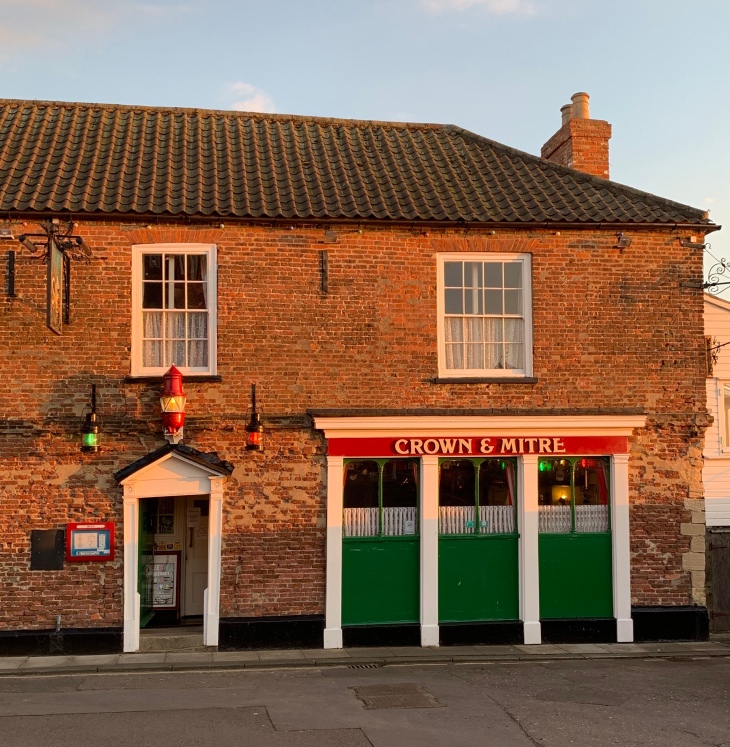 Roger too was a Londoner. He has run the pub for the last twenty five years and had planned to open his own Anchor Brewery ten years ago. The other side of this sign says it is ‘coming soon’ rather optimistically, though he has the brewkit.

The word ‘character’ can be a euphemism for many things. One of Roger’s is a penchant for sharing his political views with great vigour. It’s safe to say he doesn’t consider himself to be very European. The beer was spot on (including two from Elgood and one from Cotleigh – but no one else was in on a midweek evening. His customers know him well. 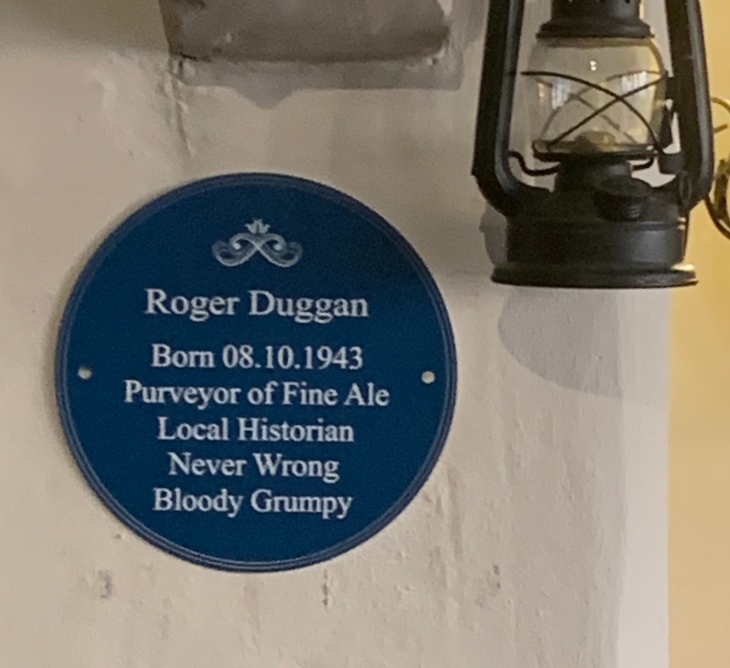 The 1953 flood made its mark in the pub. Roger probably blamed it on European water.

Our last port of call was the Fenman by the station. The bar was almost empty by then and looked like an aquarium though the Abbot was a suitable nightcap. A slightly anti-climactic end to a highly enjoyable evening in a superb town.

The next day we cycled on to Norwich but when I got home I checked my records and found I had already been to the Crown and Mitre. How could I possibly have forgotten?

13 thoughts on “Kings of Lynn”